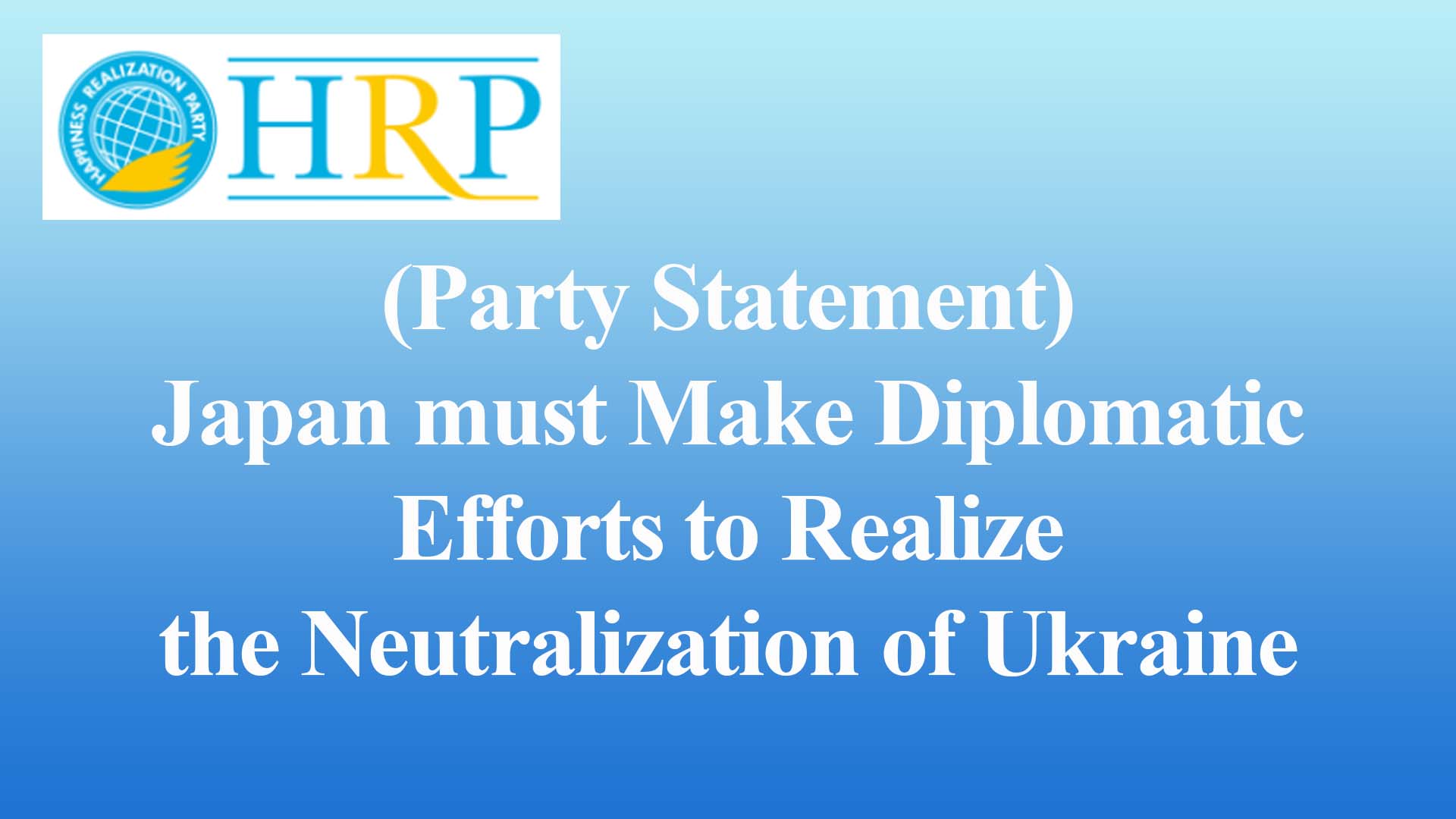 
It has been two weeks since Russia invaded Ukraine. It is extremely painful to see many lives are being lost in reality. The Happiness Realization Party (HRP) sincerely hopes that peace will come to the area as soon as possible. In order to achieve it, it is necessary to think about the “rightness” from the global point of view.


The international community observes the current situation from the viewpoint that Russia is to be blamed one-sidedly, and Ukraine is the victim. Nonetheless, we would tend to argue that this war is a faux pas created by President Zelenskyy, who has little understanding of Russia’s standpoint and tried to approach the West rapidly.


From a geopolitical point of view, Ukraine is Russia’s buffer zone with the NATO nations. Ukraine’s entry to NATO is, therefore, a fatal blow for Russia’s security. It should have been evident that Russia would take countermeasures if Ukraine took a radical action.


The current flash point in Ukraine will be developed into a “world war” if Ukraine tries to get the Western nations and Japan involved and fight against Russia. Ukraine has to stop this “act of overstepping its authority.” The Ukrainian government should stop its artillery fire of resistance, comply with one of the ceasefire conditions that Russia is requesting – resignation of the present administration, taking a neutral position between Russia and EU, and choosing the way to survive as a nation under the new pro-Russian government.


On the other hand, the Japanese government has been following the Western nations that have been trying to corner Russia persistently and provided bulletproof vests, on top of imposing economic sanctions on Russia. However, this is an act of “military cooperation” and we cannot help but say that Japan has stepped into this matter too far. From the viewpoints of the formation of the China encirclement network as well as the energy security, it is in Japan’s national interest clearly to enforce its friendly relation with Russia. Japan has to stop following the Western nations, change its policy of containment of Russia, and conduct its original diplomacy to realize ceasefire and neutralization of Ukraine.


The difference between the faithful nation, Russia, and the materialistic nation, China, is obvious. The two nations’ understanding of human rights are entirely different. Russia’s action this time includes the meaning of protecting its nationals. It has to be understood that it is totally different from China’s hegemonic expansion. Triggered in partly by the Biden administration’s foreign policies, Russia has become increasingly isolated, and is approaching China now. It can be said that the Ukraine crisis would have never occurred if Mr. Trump – who showed his understanding of Russia’s standpoint and was pursuing the international justice – was the President of the United States now.


Amidst the deep international confusion, HRP continues to raise its voice to realize peace with justice.