Will There Be Peace in Myanmar?: Spiritual Interviews with the Guardian Spirits of Aung San Suu Kyi and Gen. Min Aung Hlaing and Messages from Shakyamuni Buddha is out now! 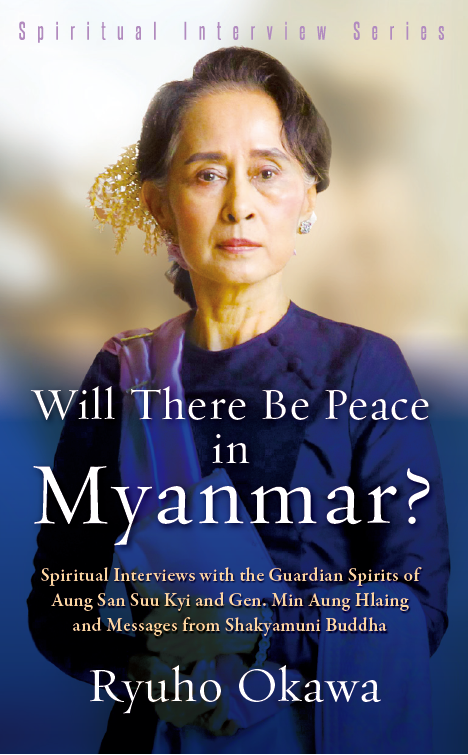 February 2021. Tatmadaw, Myanmar Armed Forces, staged a coup against the pro-democracy leader Aung San Suu Kyi and detained her under house arrest. Behind the nation’s army lurks one of the world’s major powers―a country of single-party dictatorship―working to gain its influence on Myanmar.

Using his spiritual abilities, author and spiritual leader Ryuho Okawa conducted spiritual interviews with the guardian spirits (the subconscious mind) of Daw Aung San Suu Kyi and Gen. Min Aung Hlaing, who launched a coup, and unveiled their true thoughts never reported by the media. Furthermore, Okawa also summoned Shakyamuni Buddha, the founder of Buddhism who is now in the highest dimension of Earth’s Spirit World, to ask his opinion on how the Buddhist country should get through these tough times.

The evil empire shall not rule Asia and the world. Now is the time for the world to change. The right value judgment sent down from the highest dimension of Earth’s Spirit World is the fundamental basis on which people should rely to bring peace in Myanmar, Asia, and the world.

“Myanmar (Burma) is a tragedy. Will it be the second Tibet? Or will it be brought under a rule of terror like Hong Kong? I must not be the only one shedding tears seeing soldiers shooting citizens and monks with live ammunition.
Firstly, there comes judgment on whether something is good or bad. Secondly, there come appropriate opinions on it and the international efforts to contain it. Lastly, there comes action with courage. We should not abandon Daw Aung San Suu Kyi. ”
― Ryuho Okawa, Preface―

◆Chapter 1
My Sorrow for Myanmar and Plea for Help
—Spiritual Interview with the Guardian Spirit of Aung San Suu Kyi—
1 The Myanmar Issue Is of Little Concern in Japan
2 China’s Aim behind Myanmar’s Military Coup
3 Hopes and Disappointments Regarding Japan and the West
4 Japan’s Mission as an Asian Superpower
5 The Secret of Ms. Aung San Suu Kyi’s Soul
6 Myanmar Suffers from Lack of Capable Leaders