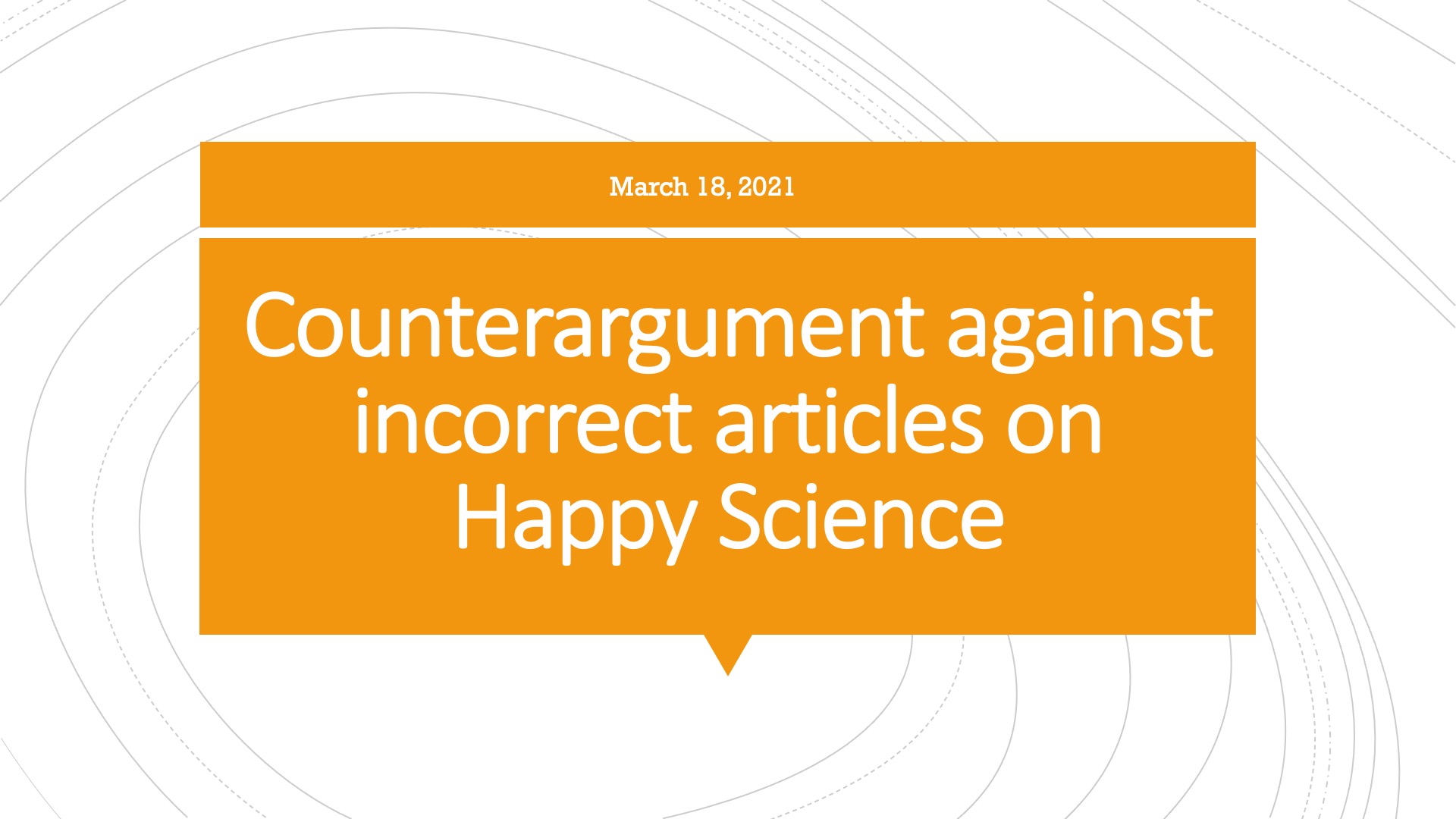 Recently, articles, which vulgarly slander Happy Science in conjunction with CPAC (the Conservative Political Action Conference) held in Florida, the U.S., have been posted on some news sites. Interestingly, the articles share common factual errors. The followings are corrections to the mistakes of fact in the articles.


1) Happy Science is an authentic religion:

All the articles label Happy Science as a “cult,” without presenting any concrete pieces of evidence for the claim. However, Happy Science is an authentic religion, which is supported by a large number of ordinary and considerate people around the world.


The article on Mail online mocks Happy Science, writing, “The Conservative Political Action Conference (CPAC) will host the leader of a ‘Scientology-like’ Japanese cult …whose founder has claimed that he is the reincarnation of an alien from Venus who created life on Earth.” This line contains serious factual errors.


Happy Science teaches that the Primordial God has created not only the Earth, but also the entire universe, and has been nurturing all existences. This Primordial God is now incarnated as the god with human character on Earth. This is the object of worship at Happy Science, named Lord El Cantare, the God of the Earth, whom Jesus called his “Heavenly Father.” The name of El Cantare has been revealed for the first time in the history of the mankind. El Cantare is NOT the reincarnation of an alien from Venus.


2) Happy Science has been trying to protect and save people from the coronavirus infection as its religious mission:

The articles impiously blame Happy Science for “selling ‘miracle cure’ for the coronavirus for $400.” Again, this claim is totally wrong. While Happy Science has never denied the value of contemporary medicine and science, it has been conducting “prayers” to protect people’s life as a religious act. It is a typical conduct by considerate people around the world to pray for the recovery of infected people. Those who take “prayers” at Happy Science make “offerings” as their “signs of gratitude.” Nonetheless, it is not an act of “commerce” but a pious “religious act.”


From a spiritual point of view, “virus infection” is the same phenomenon with “spiritual possession.” Negative feelings, such as fear, anger and hatred, attract various diseases, including virus infection, through “the Law of Same Wavelengths’ Attraction.” Therefore, people can reduce the risk of coronavirus infection by filling their mind with “heavenly vibrations” through “prayers” and/or “music.” The chance of protecting people from infection can be improved by strengthening faith to fend off possession. This is the mechanism of “immunity through faith.”


3) Happy Science has been publishing spiritual messages to prove the existence of the spirit world:

One of the articles writes, “Okawa ‘pretends’ to channel to the psychic spirits of anyone”; quoting a comment of a “researcher”, Sarah Hightower, who claims to be “an expert on Japanese cult.” However, her legitimacy as a “researcher” itself is quite questionable.


Master Okawa has so far published more than 550 books of spiritual messages (as of March 2021) – which were recorded publicly – in order to prove the existence of the spirit world. Many intellectual people, including university professors, scientists, and medical doctors, have accepted and believe in them. It is important here, however, to note that spiritual messages are not the major teachings of Happy Science , while their value is immeasurable. The opinions of various spirits that appear in the books are not necessarily the same with that of Master Okawa. In other words, the ideas presented in spiritual messages are not official statements of Happy Science.


4) Happy Science is a generous, and genuine world religion:

The articles label Happy Science as “ultranationalist” and “xenophobic.” This is 180 degrees opposite to the fact. Happy Science now has members in more than 140 nations around the world. This fact simply proves that Happy Science is far from “ultranationalist” or “xenophobic.” Happy Science teaches universal teachings, that have been accepted by diverse people internationally, regardless of their ethnicity, language, religion and so forth. Also, the teachings of Happy Science include the truth of “reincarnation”, which transcends the difference of races. An American person might have been born as a Chinese person in his/her past life.
In his book, The Laws of Faith, Master Okawa writes, “Humankind must learn the Words of the True God, overcome their differences, reconcile and harmonize, and strive to evolve and develop. … Humankind is one. From now on, believe in the existence of the God who surpasses worldly conflicts and, under God, choose to continue with the world that upholds freedom and democracy.” (p.182, The Laws of Faith, IRH Press 2018)


5) The reason why the Happiness Realization Party has been founded:

One of the articles writes, “Okawa has reportedly long sought to make Happy Science not just a spiritual-religious group but also a political movement”, implying as if Master Okawa is full of political ambitions. However, in the Preface of the book, The Manifesto of the Happiness Realization Party, Master Okawa writes, “I came to think that we need to establish a political group, in addition to the religious organization , in order to save the people and realize their happiness in reality.” (p.1, The Manifesto of the Happiness Realization Party, IRH Press 2009 [Japanese]) Happy Science has been trying to fill up the part of salvation, that religion cannot perform by itself.


Master Okawa further writes, “ In reality, the work of religion and the work of politics aren’t separated, but rather they overlap in some respects. People like Mother Teresa work hard to provide refugee aid if politics fail to function, and in a sense this is political work. … Therefore, it is impossible to completely separate these two elements, and it seems that they have a mutually complementary relationship. Accordingly, it appears that becoming more capable in the area of politics will enable religious aspects to be less focused on specific types of relief work. In that sense, religion should be more focused on elevating spirituality.” (p.52, ibid.)

Incidentally, some articles are written as if Happy Science tried to exercise political influence on CPAC through the Japanese Conservative Union (JCU). However, Happy Science has no relation with JCU from its foundation. JCU also denied the claim by the news sites immediately after the articles were posted.

It is sad to see that many people have now become materialistic and atheistic. Some people, including mass media, even ridicule the people who believe in religion. However, it is a noble act to believe in something invisible but awesome. It is an act, which differentiates human beings from animals.


In the Preface of his book, The Laws of Secret, Master Okawa writes, “With the advancement of science, people say there is nothing that cannot be explained in this modern civilization, but how can that be true? Our lives are full of the unknown. I want you to awaken more and more to the wonders of living in this world as humans. … This book shall give you a new view of the world and new guiding principles to live by. When The Laws of Secret becomes common knowledge to you, this world will be more beautiful and be filled with delight. And you will surely be thankful for the mystical truth that God’s love has been letting you live. (p.17, The Laws of Secret, IRH Press 2021)

Happy Science sincerely hopes for as many people as possible to study the teachings of Happy Science, practice them, and experience the joy of awakening to the Truth themselves, instead of being guided by wrong information.