The Laws of Faith: One World Beyond Differences is out now! What is El Cantare, God of the Earth? 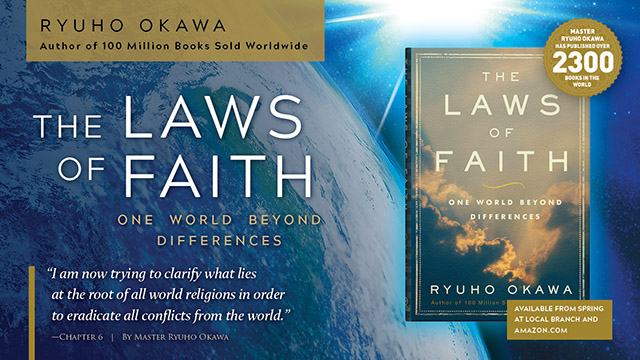 “Why do people of faith fight each other?”
“If there really is a God, then why do war and poverty and other misery occur?”
“Why does discrimination exist? Are we not equals?”
“Did God abandon humanity?”
“What is real justice?”
“Does God even exist?”

Is there any convincing answer to modern day problems such as religious intolerance and terrorist attacks, arms race, nuclear war crisis, immigrants and refugees, social welfare, and political or economic chaos?

Traditional religions like Christianity and Islam cannot give the clear answer to it.

While living in the era where various information and values jumble, people are losing the meaning of faith.

We are approaching a turning point in human history. This book, “The Laws of Faith” dives straight into these issues. This book offers us the key to accept diversities beyond differences in ethnicity, religion, race, gender, descent, and so on, harmonize the individuals and nations and create a world filled with peace and prosperity. Now it’s your turn to take the key.


“Human is one. From now on, believe in the existence of the God who surpasses worldly conflicts and, under Him, choose to continue with the world that upholds freedom and democracy”

From Chapter 6 “The Choice of Humankind”

The Laws Series is an annual volume of books that are mainly comprised of Ryuho Okawa’s lectures on various topics that highlight principles and guidelines for the activities of Happy Science every year. The Laws of the Sun, the first publication of the laws series, ranked in the annual best-selling list in Japan in 1994. Since then, all of the laws series’ titles have ranked in the annual best-selling list for more than two decades, setting socio-cultural trends in Japan and around the world.