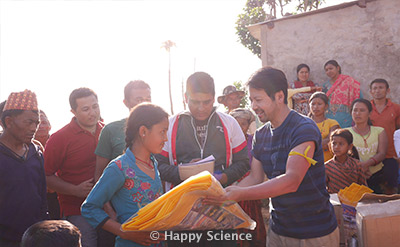 Thank you all for your warm supports.
On April 25th, 2015, a magnitude 7.8 earthquake in Nepal caused extensive damage to Nepal and its surrounding countries.

Right after the disaster, the Happy Science Group actively assists affected local areas.
The Happy Science Nepal local temple, located in the capital, Kathmandu, did not endure large damages to the building. Therefore, we opened up the prayer hall right after the disaster, so it could act as a shelter. We also assisted people with water and food, and provided provisions such as tents, as well as initiated soup kitchens.

In Japan, we set up a headquarters for emergency relief measures. We dispatched Japanese staff to the disaster area to deliver water, food, medicine, tents and blankets from neighboring countries and Japan.

By communicating through our local organization’s network, we were able to grasp the disaster situation and what supplies were needed. We delivered supplies even to regions where the government and international rescue teams did not come to aid.

Furthermore, because of the scare from the earthquake, many complained of insomnia. Due to this, we assisted in the care of one’s heart by opening up the prayer hall for prayer times and showed excerpt video from Master Ryuho Okawa’s lecture for his response to the Nepal Earthquake, Angels Will Not Forsake You (tentative title), which was translated into Nepalese.

On May 30th, at the Happy Science Nepal local temple alongside a few hundred participants, we held a ceremony called “the Nepal Earthquake’s Memorial Ceremony for Loved Ones and Prayer for Reconstruction.” In addition to performing a memorial service for those lost in the earthquake, we prayed for the restoration of Nepal’s future.

At Happy Science, through our charity, HS Nelson Mandela Fund, we sent aid to Nepal. In the future, through educational aid and social businesses, we will support their restoration.

Way to support the Nepal earthquake emergency activities:
We are accepting charity at your nearest local branch and temple, and the shoja.