“Aiming to Be a True Believer” is Available to Watch in Happy Science Temples! 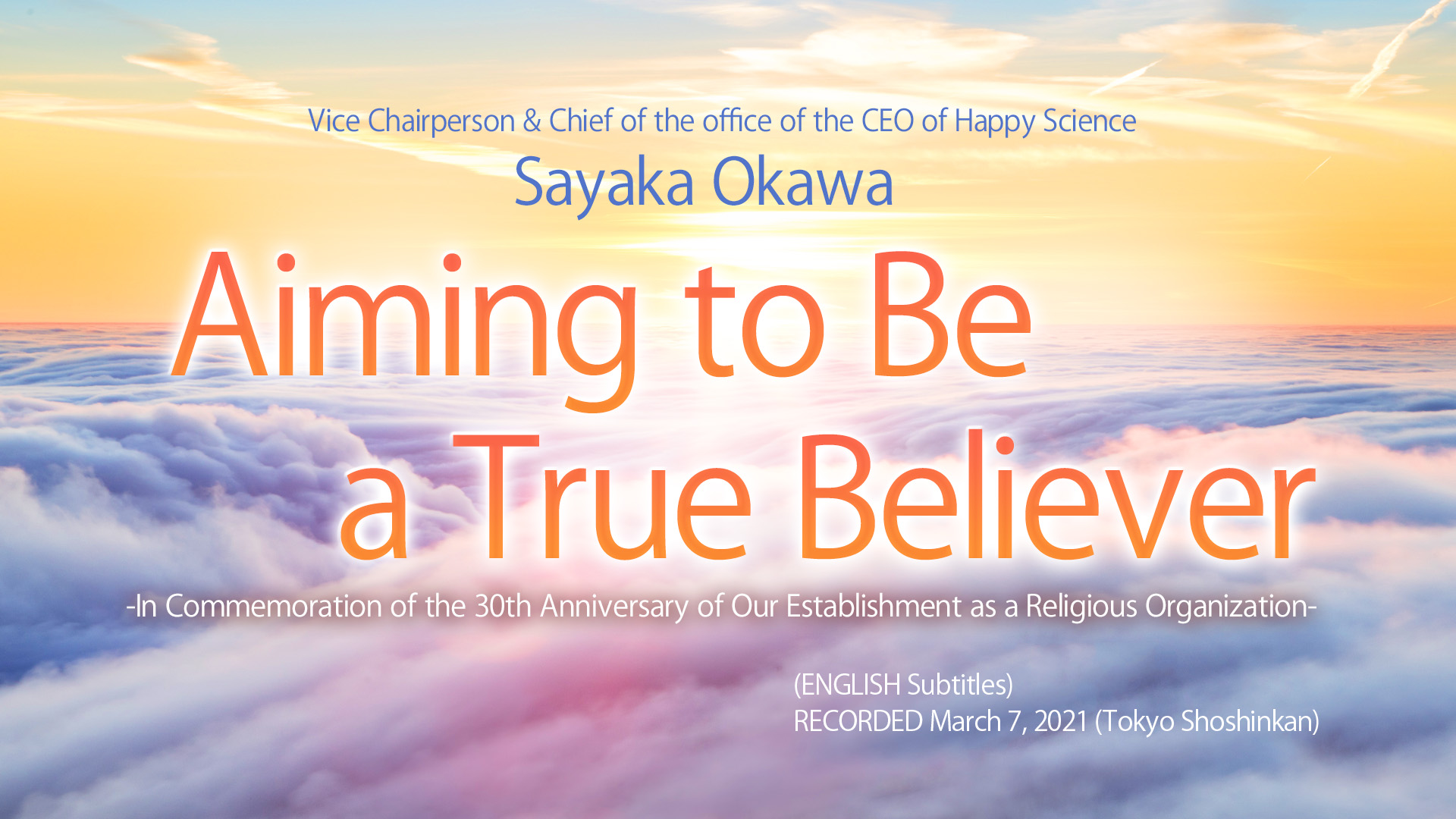 Commemorating the 30th Anniversary of our Establishment as a Religious Organization

Commemorating the 30th Anniversary of our Establishment as a Religious Organization, Vice Chairperson and Chief of CEO’s Office of Happy Science, Sayaka Okawa gave a speech at Tokyo Shoshinkan.

◆The origin of the current teachings are all from Master Okawa’s earlier lectures.

◆About “Fake Faith,” which is the opposite of “True Faith”.

◆The meaning of devoting to the Three Treasures, Buddha, Dharma and Sangha.

◆How to accept the messages given from the beings in space.

◆Master Okawa’s life and his thoughts that you can glimpse through Happy Science movies and songs.

◆What the Buddha’s Disciples must not do.

◆How we can keep up with Master Okawa’s various teachings.

◆The tendencies of Tengu, Yokai, and Youma, which they are difficult to have true faith and the origin of Japanese Shinto.

（Question and Answer）
Q1.Advice on how to strengthen faith and the conviction of the Truth to spread the teachings to the next generations.

Q2.How the new members can deepen their faith.

Q3.What disciples must do so that Master Okawa can preach the “Laws of the Universe”.

Q4.On activities to create a lot of believers in your area.

Sayaka Okawa is Vice Chairperson and Chief of CEO’s Office of Happy Science. The eldest daughter of Ryuho Okawa, Sayaka was born in Tokyo in 1991. She graduated from Ochanomizu University in Japan. She has published over 60 books that cover a wide range of topics, spanning historical non-fiction, religion, and literature. Some of her main works are Spiritual Kojiki Nyumon (literally, “Introduction to Spiritual Records of Ancient Matters Vol. 1 & 2”), Musume Kara Mita Okawa Ryuho (literally, “Ryuho Okawa as Seen from His Daughter”), Okawa Sayaka no Bungaku no Susume~Sekai Bungaku Hen~ (literally, “Sayaka Okawa’s Guide to Literature -World Literature- Vol. 1, 2, 3”), Kokoro wo Migaku (literally, “Polishing the Mind”), and the novel, Beautiful Lure – A Modern Tale of “Painted Skin.”[All titles published by IRH Press.] A writer in her own right, Sayaka has written the screenplays for the live-action feature films Immortal Hero, The Real Exorcist, Twiceborn, and Beautiful Lure -A Modern Tale of “Painted Skin.” She has received several screenplay awards, including April Best Screenplay at Oniros Film Awards 2020 for The Real Exorcist, and August Best Original Screenplay at New York Film Awards 2020 for Twiceborn. Not only a talented writer, Sayaka is also an accomplished musician. She has composed and sung the song “HIKARI.” She has also arranged and sung the songs such as, “Hold On,” “Once More,” “The Real Exorcist,” “Becoming Buddha,” “With Savior,” and “Woman’s Enlightenment.” All of these songs are created by Ryuho Okawa with inspirations from heaven. The song, “With Savior” has won several awards, including December Honorable Mention in Song Category at New York International Film Awards and the music video of the song, “Woman’s Enlightenment” has won several awards, including the Bronze Remi Award Music Video Productions Vocalist at 54th WorldFest Houston International Film Festival.