Spiritual Interview with the Guardian Spirit of Joshua Wong: His resolve to protect the freedom of Hong Kong is out now! 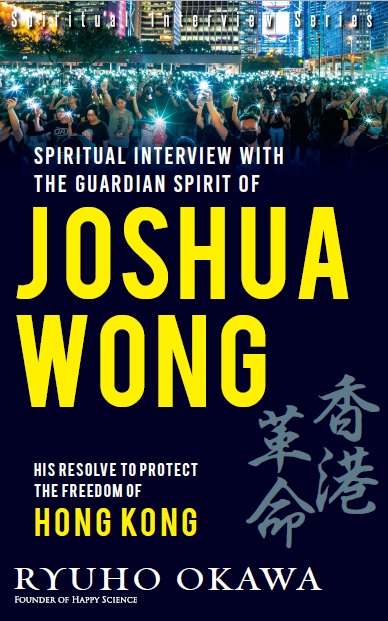 Spiritual Interview with the Guardian Spirit of Joshua Wong: His resolve to protect the freedom of Hong Kong is the record of an interview with the guardian spirit (the subconscious) of Joshua Wong, one of the young democratic activists in Hong Kong, conducted through the spiritual power of Ryuho Okawa of Happy Science, a religious group based in Japan. Happy Science aims to spread the values of freedom, democracy, and faith throughout the world, and is therefore supporting the protests in Hong Kong. This book is just one of several ways Happy Science supports the protests.

In Japan, more than 500 books in the Spiritual Interview series by Okawa reveal people’s true thoughts that cannot be made clear through the mass media, and are giving great influence. Over 50 of those are also available in English. These include spiritual interviews with the guardian spirits of national leaders such as U.S. President Donald Trump, Russian President Vladimir Putin, and Chinese President Xi Jinping. The books are having an increasing impact on international politics.

Since June 2019, millions of Hong Kong citizens have gathered in the Anti-Extradition Law Amendment Bill protests. Okawa defined this as “Hong Kong Revolution,” and decided to record “Spiritual Messages from the Guardian Spirit of Agnes Chow Ting,” a fellow activist of Wong’s, on September 3, seeing that September will be the climactic period before October 1, the National Day of the People’s Republic of China. Wong, seeking international support, visited Germany and the U.S., and spoke at the U.S. Congressional hearing in Washington, D.C. on September 17. His spiritual interview was recorded two days later, on September 19, 2019.

In the following pages, the guardian spirit of Joshua Wong says that he wants to be a disciple of Jesus Christ, brings up the story of “David and Goliath” from the Old Testament, and compares himself to the young David. He is determined to keep fighting, with the spirit of self-sacrifice, against the powerful suppression by the Communist Party of China, for freedom and fundamental rights. To those around the world who believe in God and pray for God’s justice to be served, we hereby bring you the words of the guardian spirit of Joshua Wong. Let there be glory in the courage of Joshua Wong and the freedom of Hong Kong.