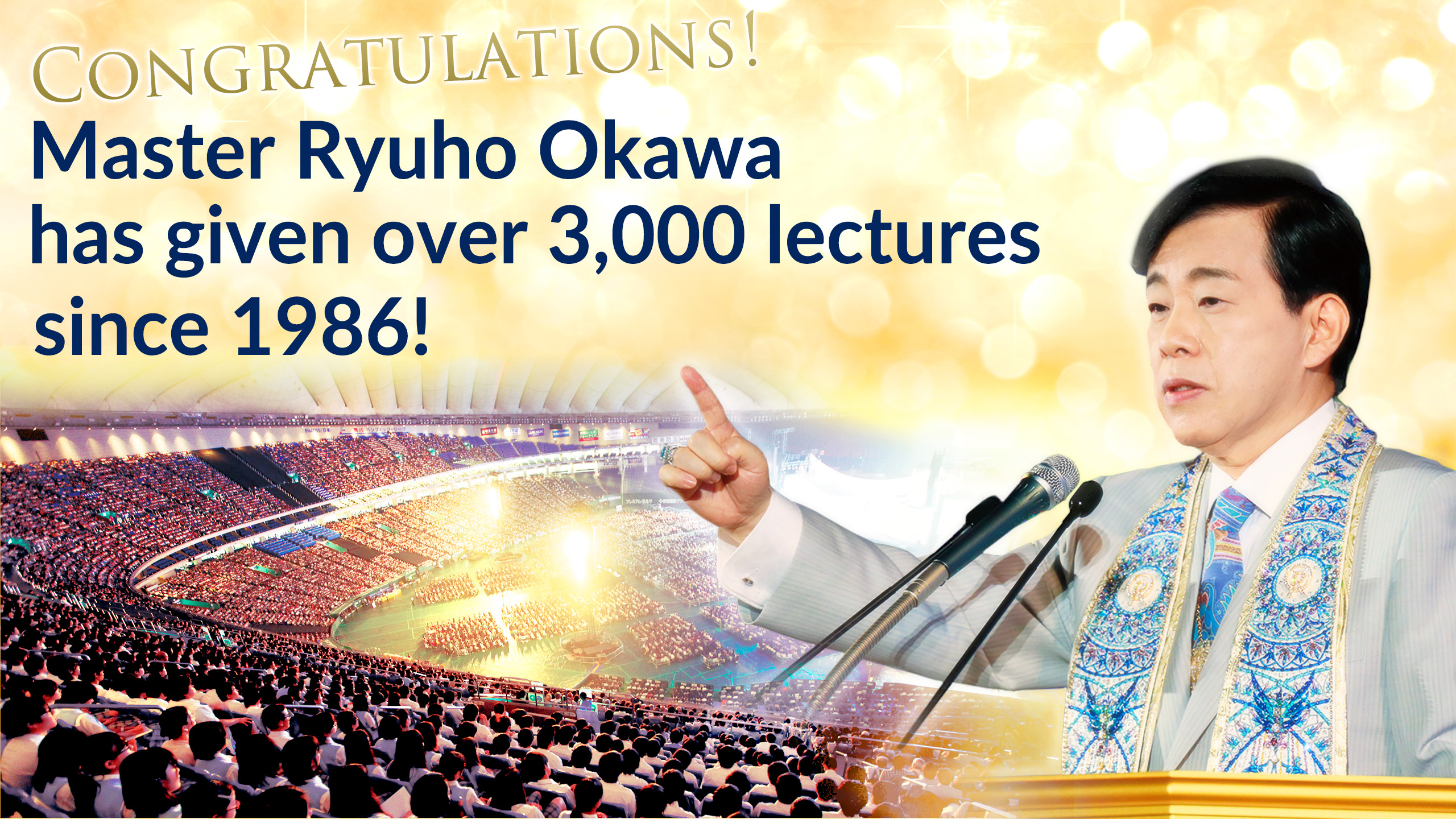 “The future shall be built upon my words.”

As this saying goes, Master Ryuho Okawa has been creating the era and changing the world through His words.

What made Him preach 3,000 lectures was infinite love

for the happiness of all humanity and for the creation of a new civilization on earth.

will continue changing the world, and create the future through His words.

On September 29th, 2019, “The Spiritual Message from Sayyid Khomeini 2,” marked the 3000th lecture. (This spiritual message can be seen in branches and temples around the world from October 2nd.)

It all started from November 23rd, 1986 at Nippori Shuhan-kaikan in Tokyo. The first lecture given was “On Establishing Happy Science,” for the gathering of Happy Science members.

33 years have passed since that day. Master Okawa has continuously preaching the law once every four days. At a remarkable speed with a variety of preaching styles: lecture style, spiritual message style, and also public lectures not only in Japan but on all five continents.

The laws that He preach are beyond gender, age, skin color, language and the teachings of the mind, spiritual truth, politics, economics, management, education, beauty, entertainment, Universe and in many other themes. Now, over 140 lectures have been given in English, and over 2,500 books are published, and also translated into 31 languages. He is stepping into the field of the extraordinary. (as of 2019)

And, each of these lectures comes His, ‘Die for the truth’ and ‘Live each day as if it were the last’ spirit that comes from every day, continuous hard effort of discipline. These lectures have a spiritual vibration and are a ‘revelation.’

Therefore, Master’s lectures have actually changed the lives of those who have gathered to the lectures, or heard them afterwards through tapes or videos, or read them through books and been changing the destiny of humanity and the world, the age being built upon His words.

Looking Back at the Footsteps of Reaching 3,000 Lectures.

The Beginning of Missionary Work

The year after the first commemorative lecture, on March, 1987, “The Principle of Happiness” was preached. As a specific way of ‘exploring the right mind,’ ‘Fourfold Path (Love, Wisdom, Self-Reflection, and Progress) was revealed. With this lecture as the beginning, Master Okawa started preaching the core parts of the law and building the system of Buddha’s Truth from the start. In the same year in May, “The Principle of Love,” in December, “The Principle of Progress,” and continuing on to March 1988, “The Principle of Wisdom,” in October, “The Principle of Self-Reflection.” And the next year, 1989, March, “The Constant Change of Civilizations of Truth” and “What is Happy Science” was preached. Master Okawa made the catch phrase, “The Life School for Gratuates” before receiving religious organization status and conducted many seminars. Many materials and opportunities to study and explore the Truth were given, and core leader members of Happy Science were nurtured.

The Opening of the Great Missionary Work, and Declaration of El Cantare.

The first public lecture in 1990 was “Love and Faith,” and then the May seminar, “Faith and Missionary Work,” which accerlated the members in their missionary work. February 1991, “Depart for the Miracle,” was preached and then next month, March 7th, we Happy Science received religious organization status. In May, at the school festival at the University of Tokyo, Master Okawa conducted an outside venue public lecture titled “An Era of Daybreak”. In same year, on July 15th, the first Goseitansai (The Celebration of the Lord’s Descent) was held. Gathering 50,000 people to Tokyo Dome, Master Okawa declared that He is El Cantare. And The El Cantare Celebration was held in December in the same year, and the lecture, “Constructing the New Civilization” was preached. From this point on, every July we hold ‘Goseitansai,’ and every December we hold ‘El Cantare Celebration’. Moreover, following the lecture, “Happy Science Theory of Making Prosperous Country” was given in October 1994. Master Okawa steps into a full-fledged reformation of the society and preaches on politics, economics, foreign affairs, the problems that society holds, and other different fields and conveys His opinions. With Master Okawa’s lecture as its center, the movement of salvation strongly developed.

Resurrection from ‘The Third Death.’ Starting of Missionary Tour to Branches

On May 14th, 2004, Master faced His third death. However, He even overcame death and resurrected. With the determination to ‘die for the truth,’ He aimed to complete preaching 3,000 lectures using His life. From June 2007, He started missionary tour (to go to places to spread the truth) to branches all over Japan. Two years after, He completed all 47 prefectures in Japan and followers were all influenced by His passion for the salvation and the missionary activities further expanded. After the resurrection, with the remarkable speed, Master Okawa gave over 2,000 lectures and now the number has reached to over 3,000. What Master preaches instantaneously gets published as a book. Therefore, in these recently years, He publishes one book in 1.7 days. This is an astounding speed!!(as of 2019)

Salvation for All Humanity. Completed Missionary Tour to 15 Places in Five Continents.

The first formal lecture overseas, “Be Positive” was preached in November 2007, at Hawaii Local Branch. (The First Turning of The Dharma Wheels Overseas) In that lecture, Master Okawa clearly stated that, “El Cantare is the being whom Jesus called ‘Father’.” This was the beginning of the ‘Declaration of El Cantare’ in overseas. Then, in 2008 He visited The United States of America, England, Korea, and Taiwan and in the year 2009, He visited Australia. In November 2010, Master visited Brazil and held 5 lectures. Furthermore, He visited India and Nepal between late February and early March in 2011, giving 4 lectures in total. In India, where he preached “The Real Buddha and New Hope,” 40,000 people came to watch and listen to the lecture. Also, in May, He visited the Philippines and Hong Kong, and in September Malaysia and Singapore, and in November Sri Lanka, to give a lecture. The following year, in June, He visited Uganda, Africa (Lecture title: The Light of New Hope) and completed His missionary tour to five continents. In the same year, He conducted the second lecture in Sydney, Australia, and to show the world what ‘justice’ is, He flew to the States just before the U.S. presidency election in 2016. In New York, he taught, “Freedom, Justice, and Happiness” and called out “Trump Revolution.” In 2018, He visited Germany, and in the following year, in order to protect the world from the totalitarian threat, as the World Teacher, He visited Taiwan and preached a lecture despite risking His life.

Show the Wish of God and Buddha in the Field of Politics in Japan and the World.

From 2010, public spiritual messages started at full scale. A spiritual message is given through Master’s voice, to clearly confess the feelings of the existing spirits in the spiritual world, or invite a living person’s guardian spirit to reveal their true intentions or their subconscious and find out what is in their mind. Moreover, there is “remote reading,” which is a superpower to see places far beyond, and “space people reading”, which is to read the space people’s memory of their reincarnations on Earth, or “UFO reading,” which is to have contact with a being in the UFO in the sky. And so, many unknown aspects of the universe and the possibility of humanity have been explored. Now more than 500 books are released in the public spiritual message series.

The teachings of “beauty” were officially taught from 2011. Three years later, the spiritual messages from celebrities started. They talked about their secrets in succeeding in the world of entertainment. This became a new set of teachings. Now, learning and studying the teachings of beauty and entertainment taught by Master Okawa and other spirits in show business, Happy Science has been actively creating movies and music, as well as operating our entertainment firms. With Master Okawa’s lectures as the original scripts, we have now directed and produced 18 films. There are over 100 songs used in the movies which all were created by Master Okawa. On October 18th, 2019 “Immortal Hero” is coming to theaters in Japan, the U.S and Canada simultaneously. This movie has received a high reputation and received a total of 22 awards in 6 different countries.

To Create Education for the Future.

Witnessing crucial bullying problems among schools and the concealment tendency of schools, Master Okawa preached lectures based on education in December 2006, and proposed “Bullying Punishment Act” (draft). Six years after that, the National Diet enacted “Act for Promotion of Preventive Measures against Bullying.” Furthermore, seeking for ideal education which nurtures richness of the mind and faith as its basis, Master Okawa founded Happy Science Academy Nasu Campus and Kansai Campus, and once in a while visits them and gives lectures to the students. Also, establishing the studies for the new age, He successively published Happy Science University series books. In April 2005, the Higher Religious Educational Institution Happy Science University was opened and is now educating many students with the teachings to play an active role for the future world.

Encountering the Miracle Given.

The history of 33 years is indeed, proof of the rebirth of Buddha, the reincarnation of the Savior and it is a ‘mercy’ from the God of gods, the God of the Earth El Cantare given to humanity and a ‘miracle” itself.
Out of 3,000 lectures, most of them can be seen in Happy Science local branches and temples. Witness the miracle happening in front of you at this moment by visiting Happy Science local branches and temples. Let us realize happiness that transcends this life and the other world and create world utopia!