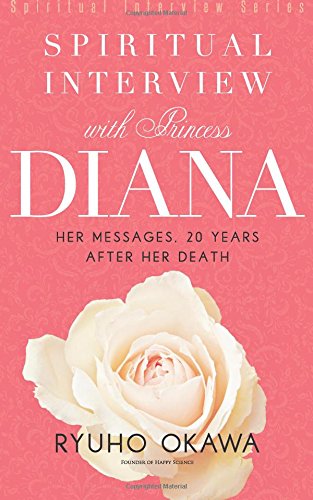 In August 2017, the month that will mark 20 years from Princess Diana’s death, Ryuho Okawa used his extraordinary spiritual power (similar to but surpassing Shakyamuni Buddha’s) and summoned her spirit for a spiritual interview. This book is a record of the session.

Spiritual Interview with Princess Diana: Her messages, 20 years after her death tells us about the background of the Paris accident and what Diana has been doing since her death. Diana said that through the spiritual conversation, she was able to deepen her understanding on the Spirit World and her own soul, and that she gained the key to return to the world of goddesses in Heaven. This book will provide comfort to many people around the world who mourned Diana’s early and unfortunate death, and still admire her beauty and love in their memories. It will also serve as an essential factor in praying for her happiness and glory in the Spirit World.

For over 30 years, Ryuho Okawa has been conducting spiritual interviews with the spirits of great figures and well-known people who passed away in recent years. Not only that, he has also conducted such interviews with the guardian spirits, or hidden consciousnesses, of living people. Some of these spirits include Mother Teresa, Muhammad, Jesus Christ, Steve Jobs and the guardian spirit of Donald Trump. The purpose of conducting spiritual interviews is to prove the existence of the Spirit World, reincarnation and guardian spirits, and to enlighten people of the truth and diversity of the Spirit World. Okawa has published more than 450 books of the spiritual interview series. The number and content of these books prove that spiritual messages are not fiction, but rather a real spiritual phenomenon.