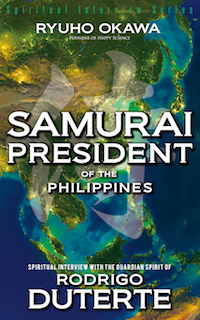 
Samurai President of the Philippines contains the spiritual interview with the subconscious of President Duterte, and reveals that the president is the reincarnation of the internationally renowned, proud Japanese military officer. The secret to his hard-lined leadership of executing over one thousand drug offenders lies in his past life as a Japanese general who fought a deadly battle. Here is the nature of his soul and the true mind of the “samurai president” who will be a key person in Asia from now on.