The Trump Card in the United States: Spiritual Messages from the Guardian Spirit of Donald Trump is out now! 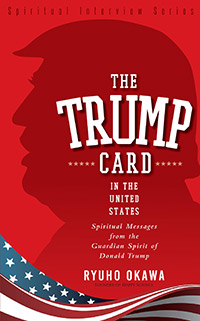 There are politicians and presidential candidates who do not speak their candid opinions because they want to make sure their statements are politically correct. Donald Trump captures the heart of many Americans because he says things that these people can’t. This interview, however, is even a fresh experience for someone like Donald Trump, since it reveals his truest of true thoughts. Why? Because it is his subconscious voice, which cannot be reported by worldly media.


Master Ryuho Okawa of Happy Science, the author of this book and more than 2,000 others, is an internationally recognized religious leader who has his lectures broadcast on TV, in Japan and around the world. Master Okawa has been publishing books based on conversations with guardian spirits, who are considered to be a part of the subconscious, of living people by summoning them using a method like the one used in spiritualism. These books include spiritual interviews with the guardian spirits of Barack Obama, Hillary Clinton, Vladimir Putin, Bashar al-Assad, Shinzo Abe, Xi Jinping, Kim Jong-un, Bill Gates, and more, which are giving increasing influence over international politics and foreign affairs.


In The Trump Card in the President Election, Donald Trump’s guardian spirit reveals his hand that even the American media, candidates and citizens do not know, on topics such as Muslim immigration, media’s criticisms against him, Chinese expansionism and how he intends to “make America great again.” This book is a must-read for all people, including those who support Donald Trump, those who oppose Donald Trump, those who call him a false prophet and those who call him the Antichrist, to learn the true nature of this man of great controversy.