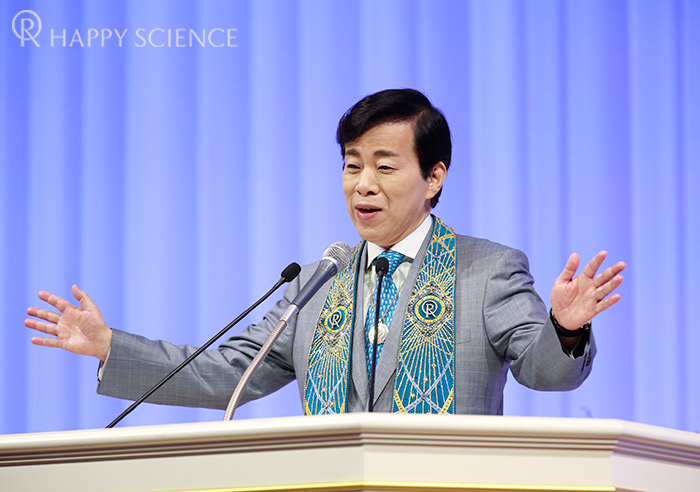 
At the Okinawa Convention Center, Happy Science group prepared several booths, such as the special booth for the upcoming movie “I’m Fine, My Angel” that is set to release this spring. The venue was filled with about 3,000 people. 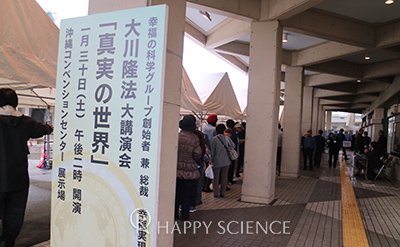 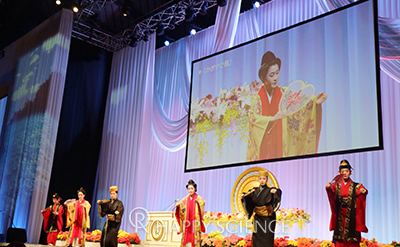 Once it was time for the lecture to begin, Master Ryuho Okawa was welcomed with a big round of applause and standing ovation from a full audience as he walked toward the podium. Master Okawa touched upon several topics in his lecture:

・The state of China’s censorship
・The truth behind the recent East Asian affairs and international politics
・How an alliance with America, the world’s strongest country, is a significant asset
・The hidden intentions of the present Emperor who visited the Philippines
・Problems of Bank of Japan adopting the negative interest rate
・On the risk of increasing fiscal deficit by increasing consumption tax and limitations of Abenomics
・Since ancient times, the Spirit World of Okinawa has belonged to Japan so amongst the Japanese Gods and Goddesses, there is a Goddess with Okinawan roots.
・“We will never let Okinawa to become a colony of another country again” 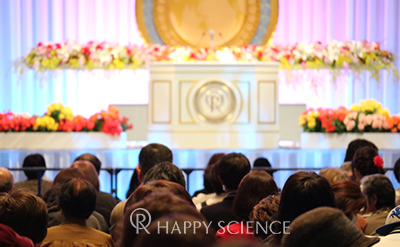 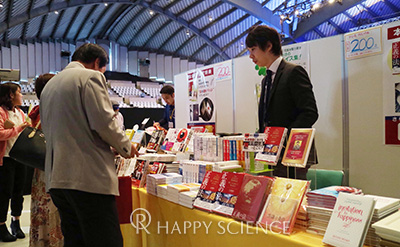 Some comments from attendees

● Okinawa has been a part of Japan since 2,000 years ago. We will never give it away to another country. I was touched by such a strong and powerful sermon. (Female, 50s)

● I had tears running down my face when I heard Master Ryuho Okawa say, “We will never let Okinawa be colonized again.” For now, I will live to the best of my ability to establish justice and God’ sontology. (Male, 10s)

● I felt a strong sensation when I saw Master through my own eyes. Unlike how I imagined, he was very radiant. I would like to meet him again. (Male, 20s)

● I was fascinated when Master Ryuho Okawa declared, “I would not lie to Japan or the world.” He clearly taught us the importance of diplomacy, the negative interest policy, and the spirit of capitalism. (Male, 40s)

● I’ve always believed that humans must look within themselves to make judgments. I strongly agreed with Master Ryuho Okawa’s speech today and decided to become a member. I was strongly convinced that Master wasn’t only concerned with his own happiness, but aims to make everyone happy as well. (Male, 60s)

● Among all the independence movement in Okinawa, the words “Okinawa is Japan” in relation to the Japanese Shinto stories resonated with my heart. (Male, 40s)

● “The truth is strong.” There is nothing more than that. Politicians that can speak on the truth must be strong. I felt the importance of finding what we each believe in, and charge toward it. (Male, 50s)

● Master Okawa’s love for Okinawa got through to me. Happy Science conveys the truth in terms of politics as well, so we must spread these teachings to more people. I will also do my best to study more and do missionary activity. (Female, 20s)

Flash Report: 2016 Grand Lecture Presentation: “A Lecture On The Laws of Justice”
Flash Report: The 2015 El Cantare Celebration lecture titled,To The World We Can Believe In
We Will Not Allow Okinawa to Become a Colony of Another Country