For the Love of the Country: Untold Story of the Battle of Peleliu: a Memoir of Japanese Colonel Kunio Nakagawa is out now! 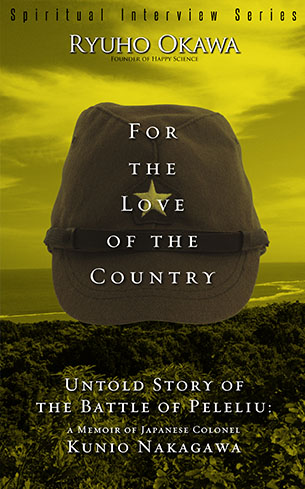 For the Love of the Country

This year, 2015, makes 70 years since the end of WWII. Now is the time to ask, “Is it correct to interpret the Pacific War as a war that fascist Japan lost to democratic America?” What was the true reason for Japan going into WWII? What was Japan trying to accomplish? What kind of influence did Japan have on world history by fighting in the war?

In For the Love of the Country, the spirit of Colonel Kunio Nakagawa, garrison commander of Peleliu Island, tells us the untold story of the historical battle between the U.S. Marine Corps and the Japanese forces via spiritual interview conducted by Master Ryuho Okawa of Happy Science. This approach is one method of “religious journalism.”

“For the Love of the Country” is a phrase taken from the spiritual messages of Colonel Nakagawa. His deep and sublime love was surely not inferior to that of the U.S. soldiers. We would like you to read this book carefully, page by page, word by word, and listen to your inner voice. The colonel’s strong sense of love will definitely touch your heart.

A False Memory: Nominating the “Nanjing Massacre” to the UNESCO Memory of the World Programme